Conservative Home December 27th : “It is no secret that some senior civil servants in the Foreign Office do not share the Prime Minister’s commitment to implementing the Truro Recommendations.” Why he is right and they are wrong. And the persecution they ignore in China. 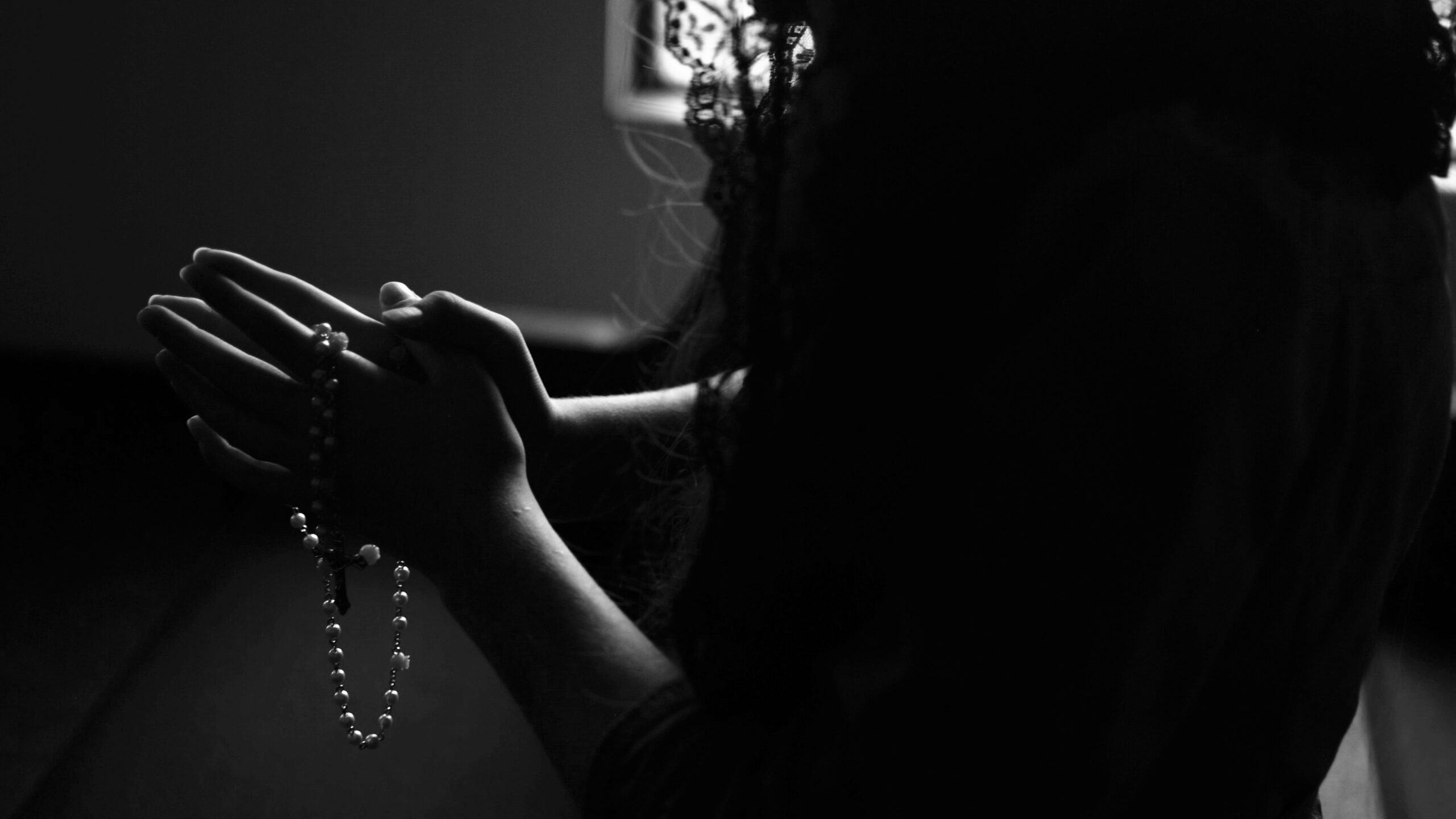 On Boxing Day 2018 Jeremy Hunt MP, then Secretary of State for Foreign and Commonwealth Affairs, announced that he had asked Bishop Philip Mounstephen, Bishop of Truro, to establish an independent review into the global persecution of Christians. On July 4th he published his findings – including the estimate that, worldwide, almost 250 million Christians live in countries where they would be subjected to high levels of persecution.

Every day an average of 11 Christians lose their lives. Mr. Hunt and Boris Johnson, welcomed Truro’s 22 recommendations and committed themselves to implement them in their entirety.

This subsequently became a manifesto commitment. The Prime Minister declared:

“We will do everything possible to champion these freedoms…. We are determined to use the tools of British diplomacy in this cause, including our permanent seat on the UN Security Council.In light of mounting evidence that Christians suffer the most widespread persecution…we have accepted, and will implement, all of the review’s challenging recommendations. We will use the UK’s global reach and programme funding to improve the lives of persecuted people.”

The Truro Inquiry was in part a response to the growing awareness in Parliament, and beyond, that this massively neglected global issue could no longer be ignored.

It had taken Jonathan (Lord) Sacks, our former Chief Rabbi, to describe the genocide wiping out Christians in the Middle East as “one of the crimes against humanity of our time.” He said he was “appalled at the lack of protest it has evoked.”

The Spectator took up the theme of our indifference to this phenomenal tidal wave of persecution: “The global war on Christians remains the greatest story never told of the early 21st century” while in a powerful editorial The Times said we had become “Spectators at the Carnage… Christianity is by most calculations the most persecuted religion of modern times.”

Nor was it coincidence that one of the biggest and most effective All Party Parliamentary Groups – on Freedom of Religion or Belief – had secured the support of hundreds of parliamentarians committed to upholding Article 18 of the 1948 Universal Declaration of Human Rights: “Everyone has the right to freedom of thought, conscience, and religion; this right includes freedom to change his religion or belief, and freedom, either alone or in community with others and in public or private, to manifest his religion or belief in teaching, practice, worship, and observance.”

Last month I stood on the ground at Simile, in Northern Iraq, where, in 1933, the throats of Assyrian Christians were cut( https://www.davidalton.net/2019/12/06/12049/  ); I met Yazidis and Christians from Sinjar whose homes were burnt down over four years ago and daughters raped or abducted (3000 Yazidi girls are still missing); and witnesses who told me that in Mosul, after their homes had been daubed in red paint with the letter “N” designating them as Nazarenes, ISIS had told them they must convert or die ( https://www.davidalton.net/2019/12/05/today-in-nineveh-the-stories-of-two-ancient-communities-rang-out-as-a-rebuke-to-the-international-community-and-its-failure-to-protect-and-prevent-genocide-and-to-punish-those-responsible-yazidi-and/ ).

All this was simply a continuation of the Genocide against the Armenian Christians which began in 1915 – claiming 1.5 million lives – and which continues to this day. In 1914, Christians made up a quarter of the Middle East’s population. Now they are less than 5%.

Article 18 is proclaimed as a key human right and yet is under attack in almost every corner of the world – from Iraq and Syria to China and North Korea, from Eritrea to Saudi Arabia, from Pakistan to Nigeria.

Without minimising other forms of persecution, or the suffering of others, the Truro Inquiry set out to map the extent and nature of the persecution facing Christians, to assess the quality of the response of the Foreign and Commonwealth Office, and to make recommendations for changes in both policy and practice. It achieved its purpose with admirable clarity and exemplary urgency.

Its recommendations go to the heart of Foreign Office and DFID culture – which is why it speaks directly to the Prime Minister’s decision to see how those departments of State and their priorities relate to one another. For example, DFID can spend £2.6 billion over ten years in Pakistan (an average of £383,000 every day) but entirely ignore persecution which leads to a mob of 1200 burning alive a Christian couple and forcing their children to watch.

In Pakistan, no one has been brought to justice for the murder of Shahbaz Bhatti, Pakistan’s Christian Minister for Minorities; indifference greets the 1,000 Hindu and Christian girls forcibly married and converted; or the apartheid-style ghettoisation of minorities into squalid colonies which I have visited. Its occupants are forced to clean latrines and sweep streets. Yet we refuse to specifically direct any of the aid we give to Pakistan for the alleviation of the suffering and destitution of these desperate minorities.

Over Christmas I wrote to Foreign Office Ministers about the case of an illiterate Pakistani Christian woman, Shagufta Kauser. She is in the prison cell in Multan previously occupied by Asia Bibi – freed after nine years on death row for alleged Blasphemy.

Shagufta and her disabled husband, Shafqat Emmanuel – paralysed from the chest down – spent their fifth Christmas separated from their four children, aged between 9 and 15 – sentenced to death. Held in separate prisons for nearly six years both Shagufta Kauser and her husband are reported to be experiencing severe depression.

A doctor reports that Shafqat’s back is almost destroyed from bed sores as he is confined to a prison bed from which he is unable to move. Although they cannot read or write, they were sentenced to death in 2014 for allegedly sending blasphemous text messages in English – a language that neither or them speak and nor do they have any knowledge of alphanumeric symbols.

At the time Mr Emmanuel said that he was tortured, forcing him to confess to something he did not do (and in the hope that his wife might then be freed). Prosecutors have been unable to produce any evidence linking the couple to the phone from which the alleged texts were sent.

Last May, in response to a parliamentary question, Ministers told me that the Government is monitoring the case. But is this doing “everything possible to champion these freedoms” or using our phenomenal aid programme to insist on the upholding of Article 18?

It is disturbing how unaddressed persecution rapidly morphs into crimes against humanity and genocide. In Recommendation 7 of the Bishop of Truro’s Review, the Government are required to ensure that there are:

“mechanisms in place to facilitate an immediate response to atrocity crimes, including genocide through activities such as setting up early warning mechanisms to identify countries at risk of atrocities, diplomacy to help de-escalate tensions and resolve disputes, and developing support to help with upstream prevention work. Recognising that the ultimate determination of genocide must be legal not political and respecting the UK’s long held policy in this area, the FCO should nonetheless determine its policy in accordance with the legal framework and should be willing to make public statements condemning such atrocities.”

Recommendation 21(b) requires the Government to “champion the prosecution of ISIS perpetrators of sex crimes against Yazidi and Christian women, not only as terrorists.”

Yet, during my recent visit to Northern Iraq and Kurdistan I took first-hand accounts from survivors who told me that no one has even spoken to them about the things which befell them and their families – let alone the establishment of a Nuremburg-style Regional Tribunal (or like those established post Rwanda or Bosnia) to bring the perpetrators to justice.

The UK Government deserves credit for initiating the Investigative Team established by the UN Security Council Resolution 2379 but it has subsequently taken its eye off the ball. In suggesting that Iraqi Courts can competently deal with these matters, it has shown wanton indifference.

The Truro Review’s final recommendation is a ‘sunset clause’ which will lead to an assessment of how the Report’s Recommendations have been implemented. Truro Review requires the Foreign Office to demonstrate that it has introduced new mechanisms identifying situations likely to escalate into mass atrocities like genocide, crimes against humanity or war crimes – and how they have co-ordinated inter-departmental responses.

The FCO is also required to review its long-standing and flawed policy of leaving the question of genocide determination to international judicial systems. A Genocide Determination Bill published by Fiona Bruce MP (chair of the Conservative Party Human Rights Commission) and myself sets out ways to achieve this.

In responding to Recommendation 21(b), the Government will have to champion the ISIS fighters’ prosecutions domestically and internationally. A new Treason Act and Magnitsky powers will be perfect tools for prosecuting terror related offences but also in ensuring prosecutions for murder, torture, rape and sexual violence and enslavement, as well as genocide, crimes against humanity, and war crimes.

Truro recommends a complete culture shift affecting “strategy and structures”, making “Freedom of Religion or Belief central to the FCO’s culture, policies and international operations” Truro calls for “Consistency and Co-ordination: Strengthening joined up thinking; Education and Engagement” and the development of “a religiously-literate local operational approach” the training and equipping of local embassy staff with in-depth knowledge of religious history, religious persecution and religious culture of the country in which they work.

It is no secret that some senior civil servants in the Foreign Office do not share the Prime Minister’s commitment to implementing the Truro Recommendations.

On their Watch diplomats around the world (as Freedom of Information Requests have revealed) have not been asked for, or given, details of any action taken to “use the UK’s global reach and programme funding to improve the lives of persecuted people.”

But even if they disagree with the Prime Minister and the good Bishop let them consider this: a 2014 report examined economic growth in 173 countries and considered 24 different factors that could impact economic growth. It found that that “religious freedom contributes to better economic and business outcomes and that advances in religious freedom”, contribute to “successful and sustainable enterprises that benefit societies and individuals.”

And let reluctant officials look at the way religious persecution can so easily become a key driver for the mass movements of refugees. 1 in 5 of all countries have suffered religiously provoked attacks since 2014 and consequently many of the 68 million refugees worldwide have been forced to flee their homes– with all the attendant loss of human dignity which that number conceals.Persecution is not a marginal, or fringe concern.

The Truro Report has rightly put it centre stage.

On a wing and a prayer in China

David Alton (Lord Alton of Liverpool) is a Crossbench Peer and a member of the House of Lords Committee on International Relations and Defence. www.davidalton.net 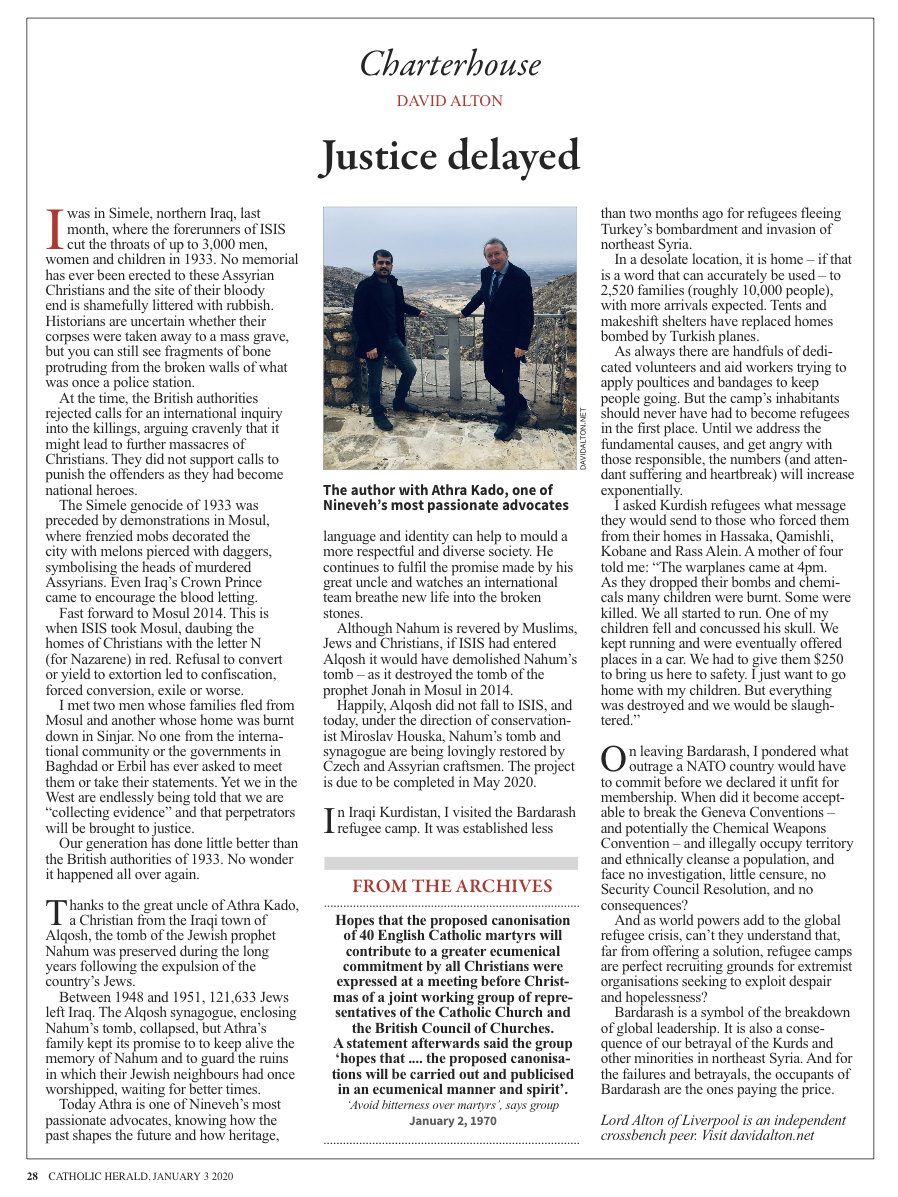