Genocide in Iraq was also about attempts to destroy identity, memory, language, and the ethnicity and beliefs of ancient peoples. But there are signs of hope as brave communities refuse to die or let their remarkable history be eradicated in the contemporary Dark Ages of ISIS.

Genocide in Iraq was also about attempts to destroy identity, memory, language, and the ethnicity and beliefs of ancient peoples. But there are signs of hope as brave communities refuse to die or let their remarkable history be eradicated in the contemporary Dark Ages of ISIS. 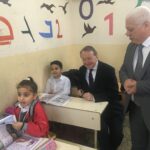 Ankawa was once an Iraqi Christian village in Kurdistan and is close to Irbil. Today, it is home to around 50,000 Christians – many with a Syriac heritage and many who fled the depredations of ISIS.

In response to their needs around 3500 students are learning the Syriac language in 50 schools in Dohuk, Ancawa and Irbil. This has been possible because of what one teacher in a school I visited today described as “the unique situation in the districts administered by the Kurdish Regional Government.”

Not only is the Syriac language being taught in that school but all subjects in the national curriculum are taught in Syriac too.

ISIS tried to destroy any sense of identity and heritage that was not their own. I heard heroic stories of the rescue of people but saw examples of stunning artefacts also saved from wanton destruction.

Kaldo Ramzi showed me Ancawa’s small museum – if which he is Director – and which records the story of the region’s Syriac peoples. He reminds you that Alexander the Great passed here to fight Darius and the Persians.

I also spent several hours with one of these guardians. He reminded me of the monk-scholars of Europe’s Dark Ages who meticulously copied and secretly saved ancient manuscripts that the barbarians would have otherwise saved.

He talked about “the horrible ideology” that seeks to erase memory and said that “ISIS talk of “the ignorance period” but theirs is the greatest ignorance.” He has digitalised and saved remarkable things – including the Islamic Hadith, the Jewish Torah, Yazidi holy books and ancient Christian manuscripts.

Having blown up a Syriac church in Mosul, imagine the consternation of ISIS on discovering in the foundations a rich Assyrian palace predating their narrow ideology by thousands of years.

Eradicating history and people’s stories and heritage – their version of Pol Pot’s Year Zero – is a crime for which they should be held accountable.

Their genocide shed much blood but also involved the central objective of blowing up of buildings, the elimination of language, culture, identity and difference. I heard how they even fired volleys of billets into paintings, targeting eyes and mouths.

And they reserved a special place in their version of hell for women. They raped, forcibly converted, enslaved and deny women and girls an education.

They are frightened of women like Pakistan’s Malala Yousafzai who reminds us that one book, one teacher, one pen can change the world.

By contrast, formidable women like Bahija Nisho , Secretary General of the Assyrian Women’s Union, and her team of women volunteers, have been setting up projects to empower women- including workshops and kindergartens.

They told me the story of Christine, a 3 year old girl abducted by ISIS, in Qaraqosh on the Nineveh Plains, and kept in captivity for 3 years. An Arab bought her and brought her up with his his children and with the Women’s Union she was ultimately reunited with her family and is now in Germany.

They and young people from the Syrian Student and Youth Movement – founded in 1991 – are determined not to be forcibly assimilated and forced to renounce their ancient identity. Significantly, not a penny of the UK’s aid programmes reaches these vulnerable minorities. Yet another example of the unwillingness to look at creed when assessing need.

Yet, despite all this, never forget the story of Pandora’s Box. When everything else had been emptied out, the one thing that remained was hope.

And within the Kurdistan Regional area of Northern Iraq there are things to celebrate and admire. There are signs of hope – especially in its schools – which are like an oasis where coexistence and respect are increasingly promoted – not least because they know that, if we cannot learn to live together, the alternative is a bleak and brutal world.