Red Wednesday and the need to defend the persecuted raised today in the House of Lords. Minister promises to look again at the case of Zhang Zhan the young woman lawyer, motivated by her faith, and jailed by the CCP for 4 years for daring to ask probing questions about the origins of Covid 19. 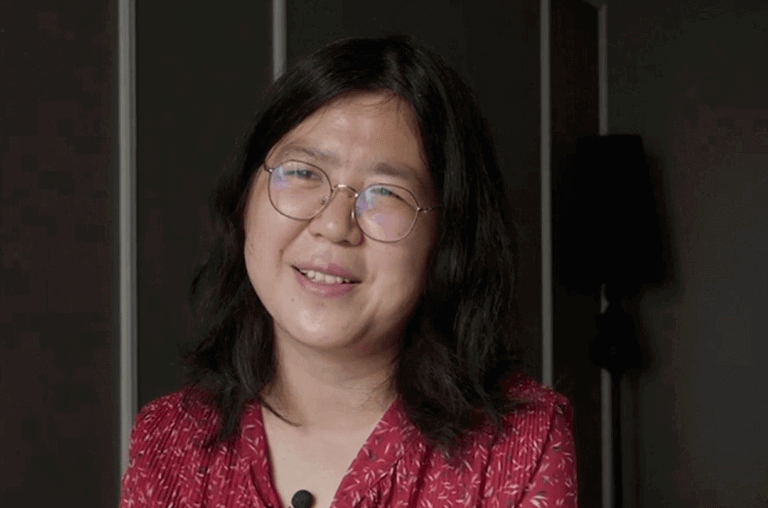 Red Wednesday And the need to defend the persecuted raised today in the House of Lords. Minister promises to look again at the case of Zeng Zhan the young woman lawyer, motivated by her faith, and jailed by the CCP for 4 years for daring to ask probing questions about the origins of Covid 19.

My Lords, on this Red Wednesday, when Mr Speaker has given instructions for the Palace of Westminster to be lit red this evening to commemorate all those who suffer or are persecuted for their belief—hundreds of millions of people around the world—will the Minister say what more we are doing to promote Article 18 of the 1948 Universal Declaration of Human Rights, which insists that every person has the right to believe, not to believe or to change their belief? In particular, will he take up again the case of Zhang Zhan, the young woman lawyer who went to Wuhan to expose the origins of Covid-19, motivated by her faith, who now languishes in a CCP jail, with British diplomats refused permission to attend the court hearing and no information given about her whereabouts, or indeed about her health?

My Lords, I will follow up and update the noble Lord on his second point. On his first point, of course, the United Kingdom stands very firm in our defence of freedom of religion or belief around the world. It is important that we remain steadfast in that. As a country, we celebrate the rich diversity of faith or belief. Indeed, our own journey, while it may have been challenging, is testament to this. As we look around the rich tapestry of faith institutions in the United Kingdom today, we have church steeples, cloisters, gurdwaras, synagogues, mosques and temples; that really demonstrates how we celebrate faith. Equally, many are denied their right to faith or belief around the world. That is why we held a conference earlier this year; the noble Lord was directly engaged with that. He also knows of my personal commitment to ensure that this remains a key priority for His Majesty’s Government.

She is a Christian human rights defender and former lawyer and is well-known in China for her activism and criticism of the abuse of human rights in China, particularly that of freedom of religion or belief.

It was this criticism of the CCP which led to her licence to practice law being suspended in 2018. In February 2020, she started reporting on the situation of the COVID-19 outbreak in Wuhan. She was subsequently arrested and found guilty, in a two-hour show trial, of “picking quarrels and provoking trouble”. She has since been sentenced to four years in prison.

While detained Zhan’s has been granted limited contact with the outside world, faced torture, and had the license of the lawyer representing her revoked.

Christian Solidarity Worldwide has described Zhan’s case as an example of a wider co-ordinated approach by the CCP to target China’s lawyers who defend cases relating to freedom of religion or belief.  Beginning in July 2015 the ‘709 crackdown’ has seen over 300 human rights lawyers and activists arrested. Many of their colleagues and family members have also been targeted and interrogated and in some cases imprisoned or disappeared. Seven years on, the Chinese government continues to detain, torture, and disappear human rights defenders, their families, and their colleagues.

today the Government Minister, Lord Ahmad of Wimbledon, promised to look again at Zhang Zhan’s case. I hope he will call for her immediate release and highlighted serious concerns about media freedom in China.

I told Parliament that a British diplomat tried to attend her trial but was not allowed access. This case has also been raised by the EU, the US, the Office of the United Nations High Commissioner for Human Rights and 45 human rights NGOs. There has been an overwhelming voice on the international stage calling for her immediate and unconditional release. A voice that the CCP continues to ignore.

In general, this case highlights the increasing difficulties of human rights defenders in China. The CCP’s uses enforced disappearances and arbitrary arrests to silence those who promoting fundamental rights, to enable torture and ill-treatment without any oversight, and to send a chilling message to any person who may dare to criticize the government.

The Chinese government continues to ignore calls for it to ratify the International Convention for the Protection of All Persons from Enforced Disappearance. It has disregarded requests for over nine years by the UN’s Working Group on Enforced and Involuntary Disappearances to visit the country.

In the meantime, the number of human rights defenders who have either faced arbitrary arrest or have simply been disappeared has been steadily growing. It is vital that the British Government continues to raise these issues with Chinese counterparts.