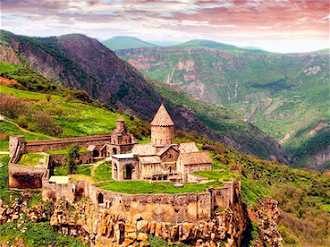 The risk of ethnic cleansing facing Armenian Christians is being highlighted at the International Criminal Court (ICC) in The Hague this week. Lawyers will argue that while the world has focused on Russia’s invasion of Ukraine this year, other conflicts are being overlooked. Nations should be held to their duty to prevent genocide under international law, rather than waiting to respond once mass atrocities have started, they say.

Professor Hannah Garry of the University of Southern California has filed a 200-page legal brief with the Office of the ICC Prosecutor, presenting detailed evidence of identity-based targeted killings in the Armenian enclave of Nagorno Karabagh, in Ethiopia and in Cameroon. She and her colleagues are calling for a preliminary examination of the conflicts in each country, where violence has been overlooked by the international community and the media.

Researchers at the University of Ghent recently announced that as many as half a million people may have been killed in the war in the Tigray area of Ethiopia. Despite a recent ceasefire, human rights groups report that Eritrean troops continue to loot and assault Tigrayan civilians. Meanwhile, for the third year in a row, the Norwegian Refugee Council cites the Anglophone Cameroon crisis as among the world’s most neglected conflicts.

In August, a cross party group of parliamentarians warned of the increasing risk of violence in the enclave of Nagorno Karabakh where 94% of the population is Armenian. Azerbaijani armed forces are using drones, grenade launchers and anti-aircraft weapons against civilians in contravention of international law and in breach of the most recent ceasefire agreement. Moreover, Armenian Christian monuments and heritage sites are being destroyed in areas now under Azerbaijani control. The parliamentarians charge that the Azerbaijani armed forces are able to act with impunity while the world’s attention is elsewhere.

Professor Garry cites Armenia, Ethiopia and Cameroon as examples of human rights violations that should invoke the duty to prevent genocide under the Responsibility to Protect doctrine adopted by UN member states in 2005. Human rights group have been frustrated that the doctrine, which obliges all countries to act proactively to prevent genocide before it begins, has not been enforced. The ICC Assembly of State Parties will be presented with Professor Garry’s detailed legal evidence.

In a separate move, Lord Alton has urged the UK Foreign Office to refer the violence in Anglophone Cameroon to the ICC for investigation. For some years Alton has been championing a Genocide Determination Bill that would empower a competent court to make a preliminary ruling on whether or not genocide may be occurring in a given set of circumstances, or whether there is a serious risk of genocide, obligating the UK to refer cases to the ICC. At the end of October, the bill had its second reading in the House of Lords, reaching the committee stage. Previously, Alton’s all party Genocide amendment, which was based on the bill, was adopted by the House of Lords with majorities of over one hundred, before it was defeated by the government.

As Lord Alton commented: “Despite the long-standing obligation to prevent genocide, in Article I of the Genocide Convention, States do little, if anything, to identify situations of serious risk of genocide and to act in order to prevent the risk morphing into repeated atrocities. States must up their game, turn grandstanding rhetoric into reality, and implement their duties under the Genocide Convention. Genocide prevention cannot be left to chance.”