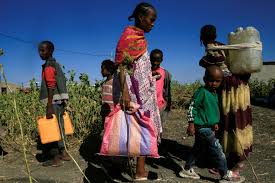 In a sign of the changing political fortunes of a man who was once a pariah, Eritrea’s President Isaias Afwerki has proven to be a staunch ally of Ethiopia’s Nobel Peace Prize winner and Prime Minister Abiy Ahmed, giving his troops much-needed support to fight the Tigray People’s Liberation Front (TPLF) in Tigray.

In a recent address to the Ethiopian parliament, the Nobel laureate revealed that Eritrea, a highly militarised one-party state, had fed, clothed and armed retreating Ethiopian soldiers when the TPLF first attacked them and seized their bases in Tigray, an Ethiopian region which borders Eritrea.

Mr Abiy said this made it possible for them to return to fight the TPLF, a former guerrilla movement with about 250,000 forces, until it was ousted from power in the region on 28 November.

“The Eritrean people have shown us… they are a relative standing by us on a tough day,” he added.

This was a significant acknowledgement by Mr Abiy, though he did not go as far as to admit claims that Mr Isaias, had also sent troops to help defeat the TPLF, a long-time foe of the Eritrean leader who has been in power since 1993.

The claim that Eritrean troops are fighting in Tigray was made by the TPLF, civilians fleeing the conflict, and Eritreans inside and outside the country.

“Isaias is sending young Eritreans to die in Tigray. The war will also further weaken the economy. But Isaias will be in power for a long time. He lets people fight for their survival so that they do not fight for their freedom,” said Paulos Tesfagiorgis, an Eritrean human rights campaigner who was forced into exile by the regime in Asmara.

A US state department spokesperson also said there were “credible reports” of the presence of Eritrean troops in Tigray, and called it a “grave development”.

Both governments deny the reports, with Eritrea’s foreign minister, Osman Saleh Mohammed, describing them as “propaganda”.

As for UN chief António Gueterres, he said Mr Abiy had assured him there were no Eritrean troops in Tigray, except in territory that Ethiopia had agreed to hand over following a historic peace deal between the two nations in 2018.

The deal ended the “no war-no peace” situation that had existed between the two nations since their 1998-2000 border war, which left up to 100,000 people dead. It earned Mr Abiy the Nobel Peace Prize, though the territory had not been transferred to Eritrea by the time the conflict in Tigray had started in early November.

Mr Abiy’s government has heavily restricted access to Tigray for the media, UN agencies and human rights bodies, making it difficult to verify reports or to investigate allegations of atrocities made against all sides in the conflict – including the shelling of a hospital from Eritrean territory.

Eritrea has not commented on the alleged shelling, mentioned in a statement by the UN human rights chief. Mr Abiy denies that his troops have killed a single civilian in Tigray.

“This war has been fought in absolute darkness. No-one knows the true scale of the conflict or its impact,” said Kenya-based Horn of Africa analyst Rashid Abdi.

US-based analyst Alex de Waal said he had been informed by a UN source that the conflict had caused the “large-scale displacement” of people in the region, the poorest in Ethiopia with a population of about five million.

“If it goes on like this, there will be mass starvation in Tigray, and a population that is embittered and angry,” Mr de Waal said.

He added that he had also learned from reliable sources in Tigray, including clerics, that Eritrean forces were involved in looting.

“We are hearing that they are even stealing doors [and] bathroom fittings,” he said.

Other Eritreans said that soldiers, including their relatives, were fighting TPLF forces on several fronts, and some of them were even wearing Ethiopian camouflage.

Eritrea insists that it does not have troops in Tigray, with its foreign minister quoted as saying: “We are not involved.”

But exiled former Eritrean diplomat Abdella Adem said he personally knew soldiers who had been wounded in combat, while a source at the public hospital in Eritrea’s southern town of Senafe told the BBC that both Eritrean and Ethiopian troops had been treated there.

Other sources in Eritrea said that Ethiopian troops had also been seen regrouping around the central town of Hagaz, and taking their wounded to the nearby Gilas Military Hospital.

UK-based Eritrean academic Gaim Kibreab said he believed that Mr Isaias had sent troops to Tigray to pursue the “liquidation” of the TPLF, which, he added, has been the Eritrean leader’s key objective since the 1998-2000 border war.

The TPLF was in power at the time in Ethiopia’s federal government and the Tigray regional government.

“In the war of 1998-2000, the TPLF humiliated the president [Mr Isaias] by taking over the small village of Badme. Even when an international tribunal ruled that the village belonged to Eritrea, the TPLF refused to withdraw from the occupied place for 18 years.

“The president has been waiting for this moment and the TPLF underestimated his craftiness and patience at its own peril,” Mr Gaim added.

Mr Isaias’ supporters insist that Eritrean troops have not crossed into Tigray, saying they had only pursued the objective of regaining sovereign territory by taking over Badme, and surrounding areas, without causing casualties.

Expressing a different view, Mr Paulos said: “Badme is back in Eritrean hands, but there has been no public announcement about it because that is not Isaias’ main concern. He is still pushing on to crush the TPLF.

“Abiy started as a peacemaker and a reformer, but he then fell into the trap of seeking revenge against the TPLF, which is what Isaias wanted.”

Mr Abiy says he tried to resolve differences with the TPLF peacefully, but was forced to act against it after it seized military bases in a night-time raid on 3 November, convincing him that it wanted to overthrow his government.

Although Mr Isaias rallied to his aid at the time, Eritrean state media has kept its audiences in the dark about the conflict, failing to even report on the TPLF-fired missiles that landed on the outskirts of the capital Asmara in early November, causing loud explosions that were heard by residents.

“Eritrean TV talks of bombs in Syria but when the missiles landed in Asmara, it said nothing,” noted exiled Eritrean former government official Dawit Fisehaye said.

In a tweet, Eritrea’s information minister Yemane Meskel said it was “pointless to amplify its [the TPLF’s] last-ditch, predictable, though inconsequential acts”.

Internet access in Eritrea is limited and the country has no independent media and no opposition parties – the fate of 11 politicians and 17 journalists detained almost 20 years ago remains unknown.

Furthermore, military conscription is compulsory while job opportunities are limited, resulting in many people – especially youths – fleeing the country. About 100,000 had been living for years in UN camps in Tigray.

The UN refugee agency said it had received “an overwhelming number of credible reports” that refugees had been killed, abducted and forcibly returned to the one-party state during the current conflict.

Although it did not say who was behind the abductions, a refugee told the BBC that it was Eritrean soldiers who loaded them onto lorries in the town of Adigrat and took them across the border to Adi Quala town.

Eritrea has not commented on its alleged involvement, but it has previously accused the UN agency of “smear campaigns” and of trying to depopulate the country.

Mr Dawit said he did not believe that the regime would ever reform.

”There was no change in Eritrea up to now because the leadership did not want it and the demise of the TPLF will not change that. Expecting reform is a pipedream,” he added.

Meanwhile, in a letter to parliamentarians, Tigrayan exiles have described conditions and listed atrocities and the challenges which are faced. None of these claims have been verified because of Ethiopia’s refusal to allow independent monitors access to the territory. Every claim should be investigated and if proven, those responsible should be held to account: