In a letter the UK Africa Minister, James Duddridge MP sets out the British Government’s concerns about the conflict in Tigray 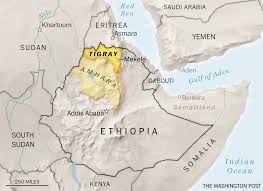 Thank you for your correspondence of 20 November to the Foreign Secretary about the
current situation in the Tigray region of Ethiopia, as well as your subsequent written
parliamentary questions. I am replying as the Minister for Africa.

As I said during my session with the APPG for Ethiopia and Djibouti on 16 December, we
are concerned about the continuing violence in Tigray region and its impact on
neighbouring countries, including Eritrea. We are deeply worried about the risks the
conflict poses to civilian lives. We are pressing all parties involved to secure immediate
humanitarian access and ensure the restoration of basic services.

We are also concerned about the risk these events pose to Ethiopia’s overall stability, its
democratic transition and the implementation of a democratising political reform
programme – of which the UK has been supportive. The impact of the conflict on
neighbouring countries as a result of the movement of refugees across borders, and the
potential risk of regional instability, is also of grave concern.

The Foreign Secretary spoke with Prime Minister Abiy on 10 November and called for the
immediate de-escalation of violence, for the protection of civilians and for unfettered
humanitarian access. He reiterated these messages when he met Ethiopian Deputy Prime
Minister Demeke on 25 November.

I also stressed these points when I spoke with the Ethiopian Ambassador in London on 18 November, and have called publicly for unfettered humanitarian access, most recently in my tweet of 9 December. Our Ambassador in Addis
Ababa continues to engage across the Ethiopian leadership in support of these objectives.
The UK continues to liaise closely with a wide range of regional and international partners
in support of these objectives.

The Foreign Secretary spoke on 16 November with Foreign
Minister Pandor of South Africa, communicating our support of President Ramaphosa’s
efforts towards a political solution. He also discussed approaches with his French and
German counterparts in Berlin on 23 November, with President Kenyatta of Kenya on 24
November, and with Prime Minister Hamdok of Sudan on 12 November.

I also reiterated our concerns about the need for an urgent peaceful settlement in Tigray when I spoke with
Foreign Minister Kutesa of Uganda on 26 November, and raised the situation in Ethiopia,
and the role Ethiopia plays in regional stability, with the Governments of Somalia and
Kenya during my visit to those two countries on 9 and 10 December. The Minister for the
Middle East and North Africa, James Cleverly MP, has done similarly with counterparts in
the Gulf. The situation also remains under consideration by the United Nations Security
Council.

The UK is working closely with humanitarian organisations to make sure aid reaches
civilians affected by the fighting. UK-funded aid agencies in Tigray are working hard to
deliver support in challenging circumstances, including shelter, water and healthcare. We
are tracking the situation and continue to raise the importance of respect for human rights
with the Government of Ethiopia and regional leaders on all sides. It is our hope that a
resolution is forthcoming, and the UK is engaging with Ethiopian and international
partners at the highest level to facilitate this.

We are extremely concerned that humanitarian agencies, including the United Nations
High Commission for Refugees (UNHCR), do not have access to refugee camps in
Tigray. UNHCR has, as a result, been unable to corroborate reports of abduction and
forced return of Eritrean refugees, meaning our understanding of the humanitarian and
protection context in camps and refugee hosting areas is limited.

The UK continues to call for immediate, free and unfettered humanitarian access across
Tigray in line with the guiding principles laid down by UN Office for the Coordination of
Humanitarian Affairs (OCHA), so that UNHCR can uphold its mandate towards refugees.
It is the responsibility of the host state to ensure refugees are protected and are not
subjected to forcible return. This was acknowledged by the Government of Ethiopia when
we raised the matter.

The British Ambassador in Eritrea raised questions of Eritrean involvement with the
Eritrean Foreign Minister on 2 December, who stated that there are no Ethiopian refugees
in Eritrea, denied that Eritrea is involved militarily in the conflict, and categorically denied
that Eritrean forces had forcibly returned Eritrean refugees to Eritrea.

We are, however, concerned to note mounting but unconfirmed evidence since then of Eritrean
involvement. Ethiopia has acknowledged the involvement of Eritrea in the disputed border
regions but denies they are more actively involved.