UK Government Quizzed about the role of UK aid in Ethiopia – £3 billion over the past decade – and the measures it is taking to apply leverage to stop the conflict in Tigray and the exodus and shocking treatment of refugees. 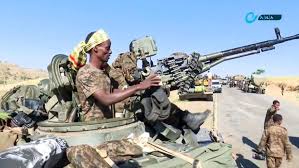 Lord Alton of Liverpool – To ask Her Majesty’s Government what assessment they have made of reports that the EU is considering withholding aid from the government of Ethiopia until the impact of the conflict in Tigray on human rights in the region can be assessed; how much UK aid was given to Ethiopia (1) last year, and (2) over the past decade; and what plans they have, if any, to use UK funding to the government of Ethiopia as leverage to help end the conflict in Tigray.
[HL11061]

Lord Ahmad of Wimbledon – The UK is engaging with partners, including the EU, on the implications of the current situation in Tigray on development and humanitarian assistance, which plays a vital role in supporting the provision of basic services and lifesaving support across the whole country. Ethiopia is the UK’s largest bilateral aid programme, reaching millions of poor people while supporting UK interests. In Financial Year 2019/2020 the UK delivered £292 million in bilateral aid, and about £3 billion over the last ten years.
We do not provide direct budget support to Ethiopia. Evidence from Ethiopia and other contexts suggests that withholding finance is not an effective lever. Withholding funding for basic services and lifesaving support would harm the most vulnerable poor people. We remain committed to the development of Ethiopia and its people, and a peaceful resolution to the conflict. We continually review our support in light of changing circumstances.

Lord Alton of Liverpool – To ask Her Majesty’s Government what assessment they have made of (1) reports from UN refugee camps in Tigray of the forcible return of Eritrean refugees to Eritrea, and (2) whether any such refugees are at risk of (a) torture, and (b) imprisonment, in Eritrea; whether they have raised this matter with the government of Eritrea; and, if so, what response they have received.
[HL11062]

Lord Ahmad of Wimbledon – We are extremely concerned that humanitarian agencies, including the United Nations High Commission for Refugees (UNHCR), do not have access to refugee camps in Tigray. UNHCR has, as a result, been unable to corroborate reports of abduction and forced return of Eritrean refugees, meaning our understanding of the humanitarian and protection context in camps and refugee hosting areas is limited. The UK continues to call for immediate, free and unfettered humanitarian access across Tigray in line with the guiding principles laid down by UN Office for the Coordination of Humanitarian Affairs (OCHA), so that UNHCR can uphold its mandate towards refugees. It is the responsibility of the host state to ensure refugees are protected and are not subjected to forcible return.
The British Ambassador in Eritrea raised these questions with the Eritrean Foreign Minister on 2 December, who denied that Eritrea is involved militarily in the conflict and categorically denied that Eritrean forces had forcibly returned Eritrean refugees to Eritrea. He also stated that there are no Ethiopian refugees in Eritrea

Article 18 of the Universal Declaration of Human...