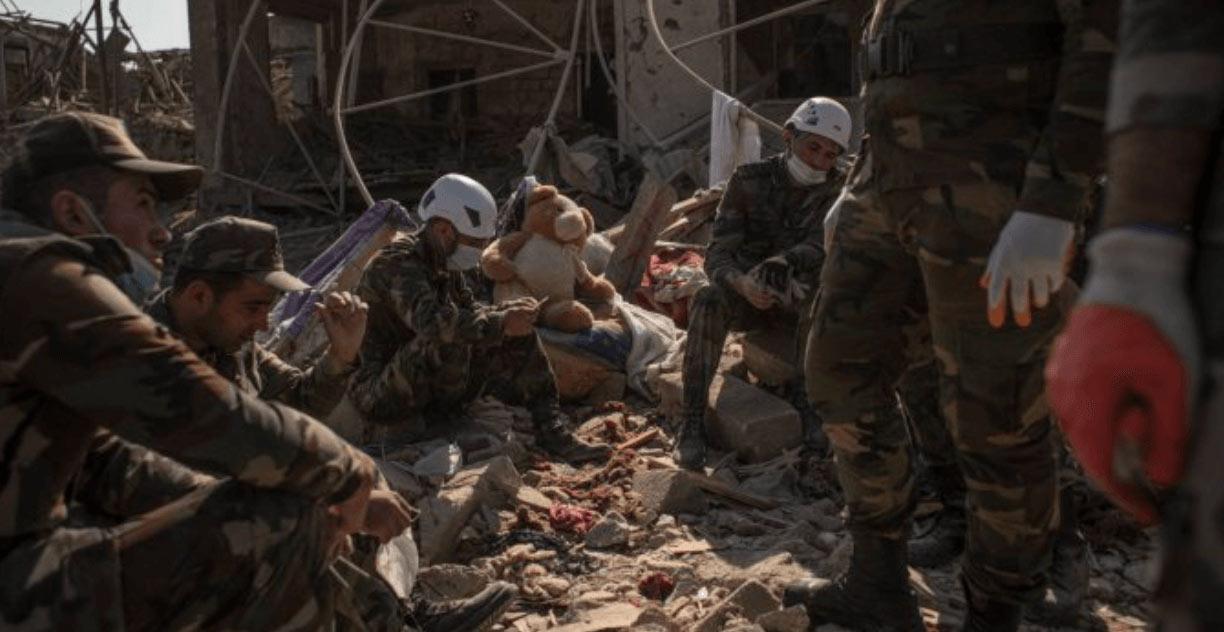 ‘MY HOME IS IN RUINS. I HAVE NOTHING LEFT’

Civilians in Nagorno Karabakh “hid under trees to escape aerial bombardments” with bodies “so destroyed” that DNA was needed to identify them, according to local witnesses who have been forced to flee their homes.

A mother-of-four told Baroness Cox on Tuesday: “My husband, a firefighter, was killed in attacks by Azerbaijan. I escaped in a car with my kids. But my home is in ruins. I have nothing left.” She said: “His body was so destroyed that we needed DNA to identify him. Everything in the village has been stolen or demolished.”

‘Evidence of torture and mutilations’

One family – whose son, an Armenian soldier, was captured by Azeri forces – said: “His phone was stolen by his captors and they posted an image of his beheaded body and sent this to his own social media account for his own family and friends to see.”

The same concerns were raised by the Armenian Human Rights Ombudsman, Arman Tatoyan, who told Baroness Cox: “We have video evidence of torture and mutilations. Civilians and POWs are humiliated by their captors. Azerbaijan have returned 29 military bodies and few civilians – DNA was needed to identify four bodies. But it refuses to provide the list of current prisoners (30 now known, but there is likely many more) and continues to withhold information and access to prisoners from the Red Cross.”

Meanwhile, concerns remain over the fragility of Monday’s peace deal, which was brokered by Russia and agreed by Azerbaijan and Armenia.

Baroness Cox arranged an emergency visit to Armenia to take aid to HART (Humanitarian Aid Relief Trust) partners and to show solidarity with the Armenian people as they seek to hold their frontline of faith and freedom. She said:

“Given the past and recent history, the Armenian population of Nagorno Karabakh justifiably fear the possibility of ethnic cleansing. Despite Monday’s ceasefire, reports continue to emerge of brutality inflicted on military and civilian prisoners, including torture and beheadings, with claims that equivalent brutalities have been perpetrated by jihadists who receive payment for every Armenian beheaded.

“We are told that, when Azeris kill or capture any Armenians, they take over their social media accounts and send pictures of dismembered, decapitated bodies to their mothers and wives. It is impossible to fathom the suffering inflicted on these women, waiting to hear from their husbands, brothers or sons, and not knowing what might come to their phone.

“We hope – and pray – that the ceasefire will bring an end to the military offensives by Azerbaijan, that the people of Nagorno Karabakh will be able to re-build their lives, and that peace will prevail.  But as the crisis continues to unfold, Nagorno Karabakh’s rightful claim to self-determination must be supported by the international community as an urgent priority.”

HART remains committed to providing advocacy and aid for our partners in Nagorno Karabakh, continuing to support our valiant partner Vardan Tadevosyan’s work with people with disabilities.