Baroness (Caroline) Cox, the Co Chair of the All Party Parliamentary Group on Armenia has today issued a briefing note to UK Parliamentarians detailing the continuing atrocities in Nagorno-Karabakh/Artsakh. Her briefing note included disturbing video material, including evidence of war crimes 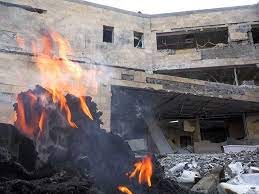 Baroness (Caroline) Cox, the Co Chair of the All Party Parliamentary Group on Armenia has today issued a briefing note to UK Parliamentarians detailing the continuing atrocities in Nagorno-Karabakh/Artsakh. Her briefing note included disturbing video material, including evidence of war crimes.

Videos of Maternity hospital in Stepanakert during and after the attack
CBN News Witnesses War Crimes: Azeri Missiles Target Hospital and Homes as Armenians Face Another ‘Existential Threat’ report from Stepanakert:

Stepanakert after the attack

Shushi after the attack https://www.facebook.com/ArtsakhInformation/videos/681133652587627

● Several days prior to the attack the President of Azerbaijan publicly made maximalist claims that “Karabakh is Azerbaijan”, “negotiations are virtually non-existent”, “we will by all means return to our lands” overtly voicing his intention to resolve the conflict by force rather by the political process. The leadership of Azerbaijan has been claiming that “international law does not work in the world today, and international treaties are just a piece of paper, having no value.”

● Prior to the aggression President Erdogan stated that Turkey will fulfil the mission that their grandfathers carried out in the Caucasus. Moreover, on several occasions he referred to the Armenians “Leftover of the sword” (kılıç artığı in Turkish) that is a commonly used insult in Turkey that often refers to the survivors of the Christian massacres that mainly targeted Armenians, Greeks and Assyrians in the Ottoman Empire and its successor, Turkey. Those were an overt and explicit threat on the continuation of the Armenian Genocide.

● Turkey does not make a secret out of its involvement. The statement of the Turkish MFA reads that “Turkey will continue to stand by brotherly Azerbaijan on the ground and at the table.”

● Thus, the aggression was meticulously preplanned and closely coordinated between Azerbaijan and Turkey. These two countries have long proclaimed to be one nation with two states. By coordinating joint attack, they lifted any doubt in this regard.

● Turkey is militarily and politically supporting Azerbaijan’s aggression against Nagorno-Karabakh. The New York Times journalists identified Turkish F-16 fire jets in a satellite image from Azerbaijan. There have been numerous independent and verified reports that the Turkish air forces coordinate aerial attacks against Nagorno-Karabakh. The Turkish military jet shot down an Armenian airplane on the territory of the Republic of Armenia.

● Monitoring of mass media and especially social networks has revealed hatred and incitement to hatred and calls for violence, including calls for killings, spread from Turkish and Azerbaijani sources. The mentioned materials are disseminated through Facebook, Twitter, TikTok, and other social media networks.
Azerbaijan’s military actions

● According to the BBC, days before the aggression Azerbaijan started drafting reservists and confiscating civilian trucks for military needs. For several months Azerbaijan was conducting military drills jointly with Turkey.

● Azerbaijan deliberately targets journalists in the conflict zone. Several French (LeMonde) and Russian journalists were severely wounded. German (Bild) and British (BBC) journalists reported about the situation under constant Azerbaijani shelling of the Armenian towns. Ever since the aggression Azerbaijan banned the access to the country of any foreign journalists except from the Turkish Government-controlled media. The latter was embedded
with the troops and reported from the front line from the very beginning of the offensive, which is another evidence that the aggression was pre-planned with active participation of the official Ankara.

● Azerbaijan widely uses foreign terrorist fighters which have been recruited and transferred by Turkey from the territory of Syria under its control. These terrorists are notorious for their genocidal acts committed against the peaceful population in Syria. Their use once again demonstrates the genocidal intent of the authorities of Azerbaijan. The use of jihadist terrorists against Nagorno-Karabakh have been confirmed by the President of France, the public statements of the Russian President, security services and the Department of Defense of the USA, among many other trustworthy sources.

● There is clear information that a certain number of military servicemen of the Republic of Artsakh or the bodies thereof are under the control of the Azerbaijani armed forces. Azerbaijani media representatives have already spread some videos and photos showing some possible crimes against Artsakh combatants. The Artsakh military servicemen and/or their bodies might be extensively abused by the Azerbaijani armed forces again.

● Azerbaijan has always been a notorious violator of the freedom of expression (world press freedom index of Azerbaijan – 168, Turkey – 154, Armenia – 61). From the day one of the aggression, Azerbaijan prohibited the work of all social media օn its territory (Armenia on the other hand is among the top ten countries of the world with total freedom on the net, according to the Freedom House).

● Azerbaijan heavily sensors information from the conflict zone and, in the absence of the international media and the local free reporting, disseminates overzealous rally-around-the-flag propaganda, misinformation and groundless accusations.

● The territory of the Republic of Armenia has been attacked several times during the war on many instances hundreds of kilometers away from the line of contact. Military drones were shot down in the Kotayk province, which is the only region of the Republic of Armenia that does not border with any of the neighboring countries. These attacks caused casualties among the civilian population and destruction of critical infrastructure.

● The Azerbaijani Armed Forces have once again grossly violated the second humanitarian ceasefire: they opened artillery and small arms fire from 00:04 to 02:45 in the northern direction, launched missile strikes from 00:20 to 02:45 in the southern direction. At 07: 20 after an active artillery fire, Azerbaijani Armed Forces launched an attack in the southern direction (Khudaferin Reservoir) in order to occupy favorable positions. There are casualties and wounded on both sides.

● After an agreement for the third ceasefire was negotiated in the USA to enter force on October 26 at 08:00, the Azerbaijani Ministry of Defense, even before 8 AM, was quick to accuse the Armenian side of blatantly violating the ceasefire. Nevertheless, it then revoked the announcement. Scarcely minutes passed since, and the Azerbaijani MoD disseminated yet another disinformation, noting that the Armenian forces were shelling the Azerbaijani positions in the northern direction.

● Grossly violating the ceasefire agreement reached in the USA, starting from 8.45 a.m. on October 26, Azerbaijani armed forces opened artillery fire at the positions of Artsakh’s Defense Army in north-eastern direction.

● On October 27 the Azerbaijani side again violated ceasefire regime shelling the Armenian border guard positions located in the south-eastern direction, at the junction with Iran. The enemy also used combat UAVs, one of which fell in Armenia’s territory.
●
Casualties in Artsakh

● The civilian population and infrastructure, peaceful towns and villages of Nagorno-Karabakh have been under constant shelling. As of October 27, 39 civilians were killed and 122 wounded.

● The Amnesty International confirmed that the residential areas of Nagorno-Karabakh were bombed by cluster munitions, which is banned under international humanitarian law. According to the Human Rights Defender of Artsakh material damage was inflicted on more than 11.600 civilian objects.

● The Holy Savior Cathedral of Shushi was attacked twice by Azerbaijan, causing substantial damage to this sacred religious site. Warzone reporters call such a sequence of strikes a “double tap,” with a second one coming to kill the journalists who record the damage and humanitarian workers that evacuate the deceased and help to save the lives of wounded. Armenian cross stones and other cultural monuments were destroyed by Azerbaijani fire in different parts of Artsakh.

● 2 civilians were killed and 3 civilians injured (including 1 child) resulting from the deliberate targeting of the civilian population in the sovereign territory of Armenia. 8 civilian houses damaged, 6 out of 8 burned out.
Armenia and Nagorno-Karabakh

● Armenia and Nagorno-Karabakh did not have any reason to start the war and any military political objective to achieve. They have always been advocating for the negotiated settlement of the conflict.

● Armenia and Nagorno-Karabakh have supported the calls of the mediator countries, the Co-Chairs of the Minsk Group of the Organization for Security and Cooperation in Europe (OSCE), namely France, Russian Federation and United States, and the international community for negotiations. Azerbaijan and Turkey, in contrast, made maximalist statements that the negotiations are possible only after they “change the status quo on the ground” and conquer Nagorno-Karabakh.

● The Republic of Armenia consistently supports the unconditional implementation of the agreements on the cessation of hostilities set in the statements reached on October 10, October 17 and October 26, with the mediation of the leaders of the OSCE Minsk Group Co-Chair countries. Azerbaijan has violated the ceasefire minutes after it entered into the force.

● The people of Nagorno-Karabakh face an existential threat from the genocidal intent of Azerbaijan and Turkey.