URGENT – What is happening at Hong Kong’s Polytechnic University is truly shocking…..UK POLITICIANS CALL ON HONG KONG CHIEF EXECUTIVE CARRIE LAM TO ACT TO PREVENT LOSS OF LIFE AT HONG KONG’S POLYTECHNIC UNIVERSITY. Lord Hogan Howe urges no use of ” lethal force because it can only make the situation worse… Unless life is at risk hold back.” Letter is sent to Carrie Lam reminding her of her duty to prevent the use of lethal force. John Bercow – former Commons Speaker – adds his voice. Plus Other Views including an article by Nathan Law

What are Carrie Lam and her puppet Government think of? The last time Beijing ordered force to be used against young pro democracy campaigners it led to the massacre of 10,000 people in Tiananmen Square. Violence begets violence and isn’t an alternative to finding consensual ways forward. 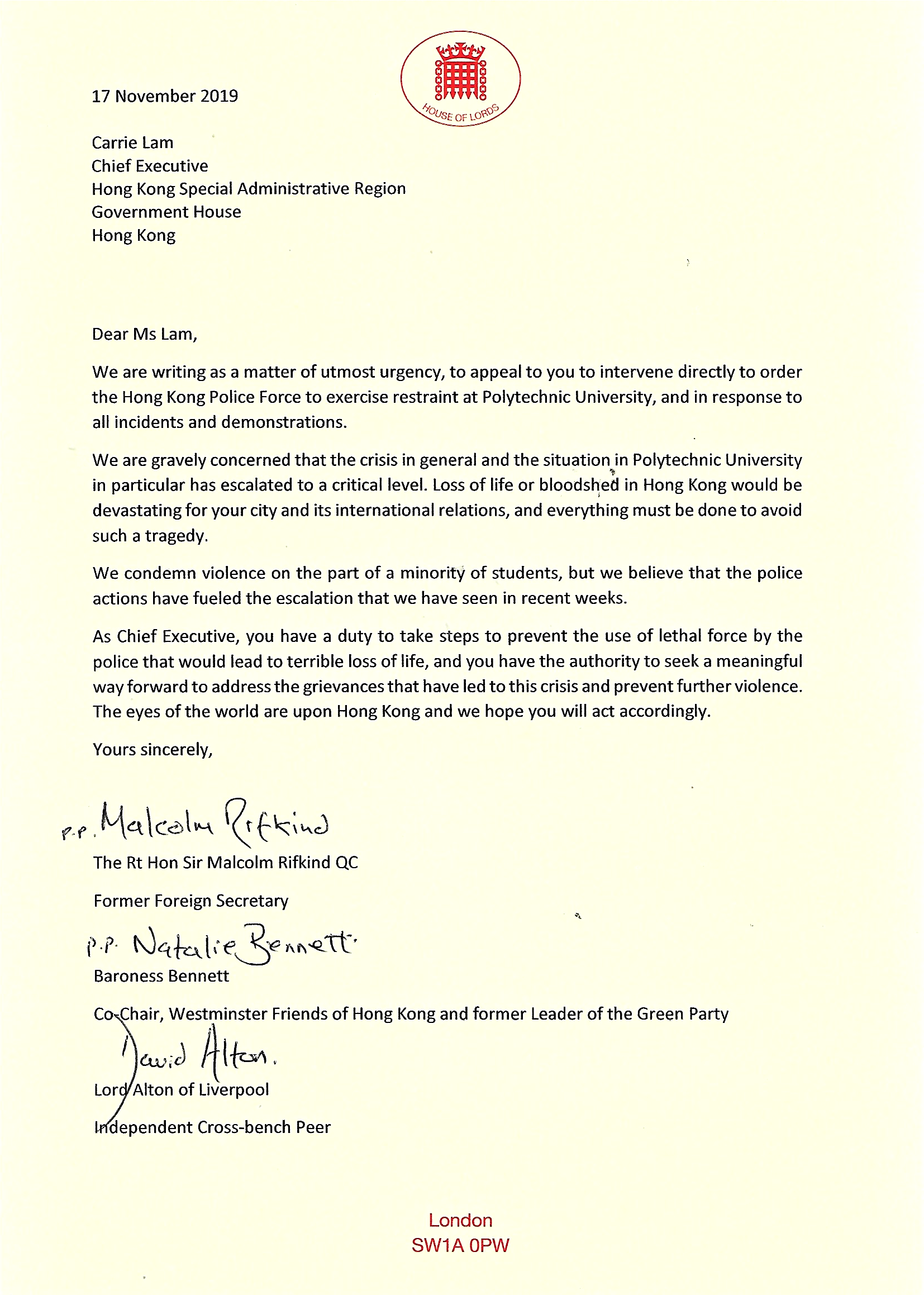 This is to acknowledge receipt of your message…. Thank you.
本辦公室已經收到你的電郵。如有需要，我們會作出回覆。謝謝。(此為電腦自動發出
的訊息。)

British Parliamentarians and a former Foreign Secretary have issued an appeal today to Hong Kong’s Chief Executive Carrie Lam, urging her to use her authority to order the Hong Kong Police Force to show restraint in its response to protests at Hong Kong’s Polytechnic University.

The crisis escalated at Hong Kong’s Polytechnic University today and fears have grown that police are poised to use lethal force against students. Journalists and first-aiders have reportedly been arrested and students are trapped inside the university unable to escape.

Speaking on Sunday afternoon, the former Foreign Secretary Sir Malcolm Rifkind, a Patron of Hong Kong Watch, said: “Hong Kong’s Chief Executive has the responsibility to do everything possible to prevent a massacre. She must order the police to exercise restraint and not to use live ammunition or other forms of lethal force. A bloodbath on a Hong Kong campus would be devastating for Hong Kong as a whole. I also urge those students who have engaged in violence to stop. I condemn violence on all sides and I call on both sides to show restraint and pull back from the brink.”

Baroness Bennett, Co-Chair of the Westminster Friends of Hong Kong, said: “I am seeing all over social media and in emails directed to me appeals for international support. The Chief Executive has control over lethal force that is being directed at demonstrators who are seeking the right to democracy and self-determination that they are supposed to be guaranteed by the Joint Declaration. Carrie Lam’s responsibility is to de-escalate the situation, not inflame it further. I call on her to do that, and the British Government to use all of its channels to seek that outcome.”

Lord Alton of Liverpool, also a Patron of Hong Kong Watch and Vice-Chairman of Westminster Friends of Hong Kong, said: “Hong Kong is at a critical juncture tonight. Bloodshed must be avoided. I join calls to Hong Kong’s Chief Executive Carrie Lam to take immediate action to prevent a tragedy. I do not condone the violence on the part of some of the students, but equally it is important to understand that the disproportionate police brutality and cynical, manipulative, provocation by agents provocateurs is what has brought Hong Kong to this crisis point. I urge Hong Kong’s authorities not to escalate the crisis further, but rather to de-escalate it and seek ways to address the protesters’ grievances rather than respond to them with force.”

“Reports that police in Hong Kong are armed with live ammunition and approaching the sit-ins is alarming. I urge the police to not use lethal force because it can only make the situation worse. Unless life is at risk hold back.”

The former Speaker of the House of Commons John Bercow, who hosted the launch of Hong Kong Watch two years ago, said:

“I have had the privilege of meeting several of the very brave pro-democracy activists, of different generations, from Hong Kong and am inspired by their courage and dignity. The erosion of freedoms in Hong Kong over recent years has spiralled out of control in recent months, and I join appeals to Carrie Lam to do her duty to protect the lives of Hong Kong citizens, especially young people, and prevent loss of life. I do not condone the violence on the part of a small minority of protesters, but I believe Hong Kong people have a right to live in freedom, with dignity, basic human rights and without fear, and for that reason I urge the Hong Kong government to order the police to exercise restraint.”

Hong Kong protest: how does this end?

By Nathan Law – HK is standing up to Beijing: can the world do so too? https://www.scmp.com/comment/opinion/article/3037678/hong-kong-protests-have-taken-globe-storm-now-world-must-stand

Plus this with the Tibetan representative:

And this report from a lady in Hong Kong:

I am writing to get your attention that the Hong Kong Police Force invaded the Hong Kong Polytechnic University on November 17 and 18, 2019.  They fired tear gas non-stop to students.  Here is the picture:

The police used excessive violence to beat up students on campus.  Here are the pictures:

Besides students, the police also arrested doctors, nurses and EMT so that no one could save the injured students.  Here are the pictures:

The following day (November 18, 2019) a lot of civilians went to the university to save students; however, they were arrested by the police before arriving at the university.  Here is the picture: