As China tells Hong Kong to force its citizens to expose their faces to facial recognition surveillance here are two stories that should make us face up to the nature of Tiananmen-style authoritarianism…
Tonight (Friday) following orders from Beijing, the Hong Kong Government said citizens may not wear masks so that pro democracy protestors can be identified.
No doubt this will enable German and British made surveillance equipment to be put to its intended use of facial recognition.
So the mask has slipped and the true face of Chinese authoritarian Communism, now dominant in Hong Kong, has been revealed to the watching world.
If you have any doubts about the nature of this authoritarian regime, now intent on bending free Hong Kong to its will, consider these two stories.
The first is the story of a Hong Kong bookseller.

Mr.Wing-kee Lam, the former manager of Causeway Bay Books, in Hong Kong, spent 8 months detained in 2015 in Chinese detention centres which he says “are worse than any prison you can imagine.”
Mr.Lam ran a successful book shop for twenty years. Among his customers were highly placed Communist Party officials from the mainland who used visits to Hong Kong to buy literature banned in China.
He says his best sellers included George Orwell’s Animal Farm and 1984.
MrLee might recall that in Animal Farm
‘No animal shall wear clothes.’ In Hong Kong they may no longer wear masks.
But another best seller was Fydor Dostoyevsky’s The House of the Dead. – a semi-autobiographical novel Dostoevsky, portrays the life of convicts in a Siberian prison camp.
Dostoyevsky and, in Stalin’s Times, Solzhenitsyn, tell the story of how prisoners are degraded and slowly driven mad by forcing them to do the same things over and over. Nineteenth century and twentieth century brutality and the coercion of fragile human beings persists into our own times.
Mr.Lam told me that he was driven to despair – denied any contact with his family- and that he wanted to commit suicide.
After release, he returned to Hong Kong but as he saw the increasing attempts to deny human rights, rule of law and democracy, and he fled to Taiwan. But, he warns “Hong Kong today, Taiwan tomorrow.”
And he says that “the U.K. needs to act urgently and immediately to ensure Hong Kong people have somewhere else to settle if the assertive empire that is now China continues to destroy an international treaty which it has signed.”
Hard to disagree
The second story concerns a brave Taiwanese who believes in democracy, human rights and the rule of law.
Ming-Che Lee, a Taiwanese citizen, has served half of a five year prison sentence in China in Chishan prison, Hunan Province, for expressing views on the Internet calling for democratic change in China. He shares a cell with three life sentence prisoners. Given no rest periods he has lost a great deal of weight.
His brave wife Ching-yu Lee has had visits to her husband refused and says that the “prisoners receive a daily diet of rotten food” she also told me that his request for books to read has been refused. Ironically, among the books that he has been told he isn’t allowed to read is Dostoyevsky’s “Crime and Punishment.”
Mrs Lee is urging people to send books to her husband at Chishan and to write to President Xi Jinping calling for the release of her husband. 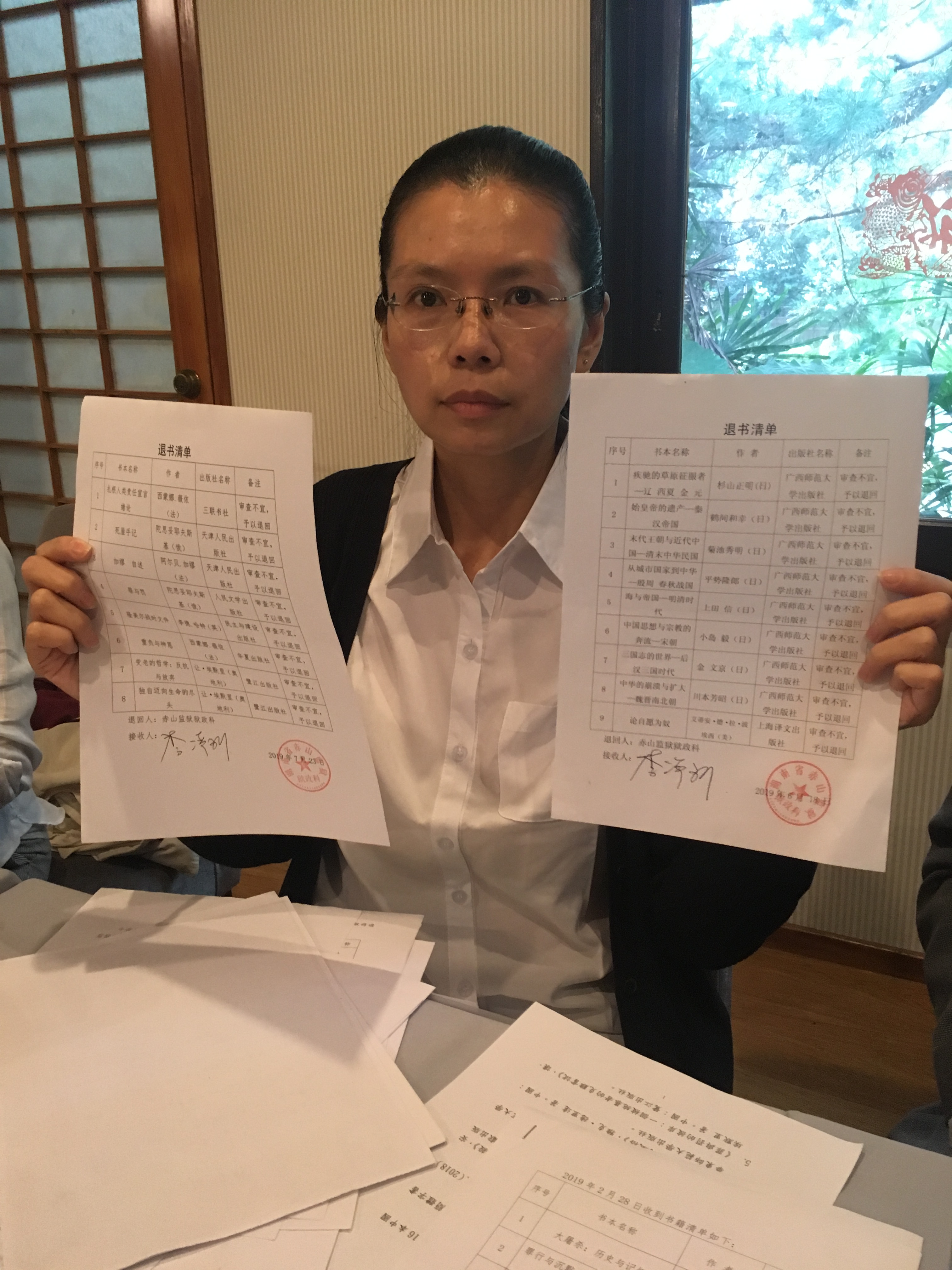 In this picture she is holding the refusal of the prison governor to allow her husband to read books.