Baby Steps Towards Euthanasia – Why the Council of Europe is Right 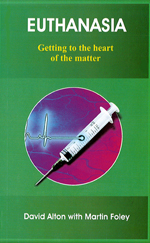 Richard Ottaway, Conservative MP for Croydon South, – a hard line advocate of abortion, population control and assisted dying, has been given time for a House of Commons debate on assisted suicide. Although the date is not yet been fixed, it is anticipated that the debate will occur in March. The Motion  will be seconded by the Labour MP, David Winnick MP, whose views are the same as Mr.Ottaway’s.
The Motion has been crafted to focus on the February 2010 Guidelines published by the Director of Public Prosecutions  – not the recent Falconer Commission Report on Assisted Dying. The movers will have seen how quickly the Falconer Report has been discredited – because of the wholly distorted basis of the Commission’s membership – and have chosen this more seductive, softer, option. Be clear, if they  win their Motion lobbyists will immediately presented it as opening the way for full blooded assisted dying and then for euthanasia. This approach has been described as “baby steps”.
One witness, to the Falconer Commission  a co-director of patient concern, candidly gave the game away, spelling it out: “I think we can only go for terminal illness at the moment, so this doesn’t actually apply to the people who are probably about to go into care homes. But, you know, baby steps.”
So when you are contemplating a care home for yourself ,or for someone you love, it’s worth bearing in mind what sort of places these care homes will become once those first, faltering, tottering baby steps are taken: care becomes killing and care homes become charnel houses.
Mr Ottaway says that “There are many who support a change in the law to allow some form of doctor assisted dying within upfront safeguards – along the lines set out by the Commission on Assisted Dying.

He adds that “In recent years, and as is well publicised, successive DPPs have chosen not to prosecute those who accompany someone abroad to die – despite there being sufficient evidence to do so in some cases.”
Mr.Ottaway then goes on to say that
“Prosecution is only avoided by exercise of the DPP’s discretion as set out in the guidelines. The guidelines could be changed at some future date. Accordingly the second part of the motion invites the Government to consult on whether they should be put on a statutory basis.”
This “clarification” would mean routine daily killing – which, like abortion (sombrely recall those “baby steps”) will end up on an industrial scale.
The whole point about our current British laws is, as the distinguished QC and Judge, Lord Carlile, points out, we have “a tough law with a kind face.”  It works remarkably well. Two full scale House of Lords Select Committee enquiries left Peers unconvinced that any change would provide sufficient safeguards for the elderly, disabled people and the terminally ill, and thus they rejected attempts to change our rigorous laws.
We simply don’t need yet another “consultation” to go over all this ground again – at least, not unless lobbyists can set up a consultation like the Falconer Commission and ensure that almost the entire membership is known to be in favour of assisted dying (and funded by the former Voluntary Euthanasia Society) before they start.  Then at last, along with the drip feed provided by sympathetic commentators and journalists, you might achieve the result you want.
The current law in Britain is crystal clear and we leave the DPP to judge every single case on its merits – leaving open the route to prosecution where he believes it to be desirable and forcing anyone contemplating the premature ending of a person’s life to weigh most seriously the possibility of prosecution.  And that is precisely how it should be.
How ironic that just as Mr.Ottaway is asking the House of Commons to consider watering down these vitally important safeguards, the Council of Europe has urged parliamentarians not to go down this route.
Having seen how full scale euthanasia laws have worked out in Holland, Belgium and Switzerland, in January they passed a new ruling that euthanasia and assisted suicide should be banned throughout Britain and the Continent.
The Resolution, which has huge implications for human rights laws in the 47 member countries of the Strasbourg-based Council of Europe, insists that such practices must not be permitted: “euthanasia, in the sense of the intentional killing by act or omission of a dependent human being for his or her alleged benefit must always be prohibited”.
Although it is not a legislative body itself, the Council of Europe was established in 1949 with the specific aim of encouraging European co-operation and the harmonising of human rights laws. It bases its own work on the European Convention on Human Rights and includes the European Court of Human Rights, which enforces the Convention , and to which Europeans can bring cases if they believe that a member country has violated their rights.
Council of Europe resolutions, like the one on euthanasia are not binding, but are hugely influential in defining the principles that inform law making in its member states – and this Resolution is bound to be cited during the House of Commons debate next month.
So, before we start taking lethal “baby steps” to Dutch-style laws ( last year in Holland there was a 13% increase and the previous year a 10% with 2,600 euthanasia deaths) or to Belgian laws (where half of Belgian nurses interviewed in a study admitted to killing patients without the patient’s consent), just think twice, and ask your MP to do the same before voting for Mr.Ottaway’s seductive Motion.

A joint investigation by the Bureau of Investigative Journalism and the Guardian has found that Nepalese Migrant farm labourers were charged thousands in illegal fees to work on UK farms. U.K. Ministers asked to take action.

A joint investigation by the Bureau of...

Will Hikvision be lining the route of HS2 With Their Surveillance Cameras? Non answer from Government Minister. HS2 should tell us or face a freedom of information request.

Baroness Vere of Norbiton, the Department for...