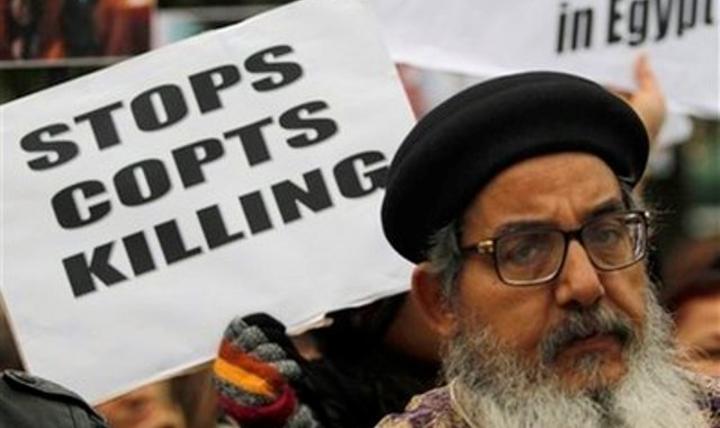 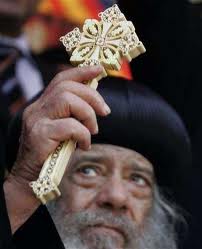 We are told the big picture of the Arab Spring is about the mould breaking events in Tunisia, Syria, Yemen, Libya, Bahrain and Egypt, but beyond the politicians’ and the commentators’ “big picture” are defenceless people in small communities, living as anxious minorities. How they are treated will determine the future of their nations – and thus far the omens are not good.
The current campaign of persecution and violation of the human rights of Egypt’s Copts have included murders both in their churches and in broad daylight, confiscation of property, discrimination and bigotry, the imposition of unjust laws, extortion, the siege of some towns, the bombing and burning down of churches, and ill treatment on a daily basis – all accompanied by the curse of impunity.
And remember what happened when moderate Muslims joined with their Coptic neighbours and marched through Cairo’s Maspero area to protest the burning of a Coptic church and how squads of radicals wielding sticks and swords attacked the protesters.
Having rammed armed vehicles into the Coptic crowd and fired live ammunition indiscriminately, the Egyptian security forces soon prohibited media coverage and rapidly tried to remove evidence. At least 26 people were killed in the massacre and more than 300 were injured. Maspero was the worst sectarian violence in Egypt in sixty years.
As Pascal once observed “Men never do evil so cheerfully as when they do it from religious conviction”.

But, surely, any religious faith which wishes to live up to its name and its ideals should help people to live, not to die; to co-exist, not to kill. The other side of this coin is that unless we have a proper understanding of the role of religion in the world there will never be peace. This is the most pressing and urgent issue of our age.
How can a country begin to call itself civilised when Copts are considered to be second class citizens in their own country and routinely deprived of their inalienable rights?

The West has been pusillanimous and largely silent in the face of such persecution.
It is hard to believe that this is happening to them in 21st Century Egypt, which prides itself on being a member of the United Nations Human Rights Council.
There is no indication that Egypt’s political leadership, or the wider international community, has come to realise the need to address the “Coptic issue.” While the Egyptian Government has made great efforts to present to the outside world an optimistic picture of the situation of the Copts, it does little to address the reality.
How often have Muslims been sentenced for killing a Copt?
Too often, in a culture of impunity, the Egyptian authorities have attempted to change facts to save face with the Western world for being blatantly unjust towards the Coptic victim, not to prevent justice for the Copts’ murderers.
On satellite channels fanatical preachers have been allowed to incite hatred with vituperative and malicious outbursts, targeting non-Muslims. It’s self evident to what such vitriol leads.
It is a cruel irony that a Government which prosecutes journalists and writers who criticise Government policies does nothing to prosecute those who are responsible for stirring hatred and making unfounded and dangerously inflammatory statements – which even include suggestions that Copts have been amassing weapons and creating a secret army – aimed at inciting further hatred and bitterness. Such rampant hate is the deadliest of all poisons.
Over the years, hundreds of Christian young women and teenage girls have been abducted from their families, raped, forcibly converted to Islam, and forced to become the wives of Muslim men. And the State has done little to support Coptic parents seeking the return of their abducted daughters.
The radicalisation of Egyptian society, says Amira Nowaira, “is now visually present on our streets and in our public spaces, not only in women’s attire but also in the large number of men wearing their beards long in an ostentatious display of their religious creed.”
Under Shari’a law, if a Muslim rejects Islam, he or she becomes an “apostate”. In most cases, this is punishable by death if a man does not repent and return to Islam. There is no explicit legal prohibition in Egypt against conversion or proselytizing, but the Egyptian Penal Code has been interpreted to prevent the conversion of Muslims to other faiths.
Often, the Egyptian Government have been responsible for the persecution and discrimination by making it difficult for Christians to build or repair their places of worship, giving few political positions to Christian leaders, and frequently detaining and torturing Muslim converts to Christianity.
All of this illustrates that, in practice, there is little standard protection for Christian groups.
Egypt has also tried to silence those tolerant members of its Muslim community who speak out against the mistreatment and unjust policies – going so far as to imprison its own citizens when they have attempted to defend the rights of Christian groups.
Those moderate Muslims – like Amira Nowaira – know that central to the creation of a decent society for the majority will be determined by how a country treats its minorities; they know that if you have no respect for the human rights and freedoms of minorities, the human rights of majorities will be ignored too. They understand that the elevation of religious freedom brings great bounty to society in the working out of charitable endeavour and the deepening of the common good.
It is the pre-eminent motivator for the common good and perhaps—in the context of the security challenges to which I have referred—this denotes the greatest benefit and reason why all governments should be seized by the importance of promoting freedom of religious belief.
For countless numbers of people their faith is about love not hate; tolerance not violence; compassion and justice, mercy and humanity.
These are indispensible qualities in a humane and civilised society – but beyond this, if we are foolish enough to believe that the contagion will not spread we will be making the old error of Neville Chamberlain.
Appeasement and indifference to far away countries, about which we claimed we knew very little, ultimately cost us dearly. Chamberlain’s principal adversary, Winston Churchill, described appeasement as feeding a crocodile, hoping it will choose to eat you last. But, eat you it will – and that is why the United States and Europe need to wake up to the security implications of their failure to make the safeguarding of minorities and the elevation of human rights a principal priority.